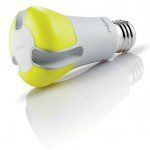 We have learned more about the internal design of the L Prize winner from Philips. If you see a photo of the product, you will notice that the remote phosphor is more yellow in color relative to the almost-orange tint of the 65W – and 75W – equivalent lamps that Philips has been selling under the EnduroLED and AmbientLED brands. The L Prize winner actually mixes red and royal blue LEDs in each of the three illumination chambers. The yellow phosphor converts the blue light to white, while largely passing the red light through. Philips’ Lindstrom said the technique was required to achieve the greater than 90 CRI required for the L Prize. The red light yeilds a warmer color temperature and broadens the spectral power distribution for better color rendering. Mixing LED colors is a technique that has been used broadly by LED makers Cree in its TrueWhite technology and Osram Opto Semiconductor in its “Brilliant-Mix technology”. But apparently the L Prize winner marks the first time the technique has been used in a standard retrofit lamp.

About the Author
Maury Wright is the Editor of LEDs Magazine.

Go to top of page